Hit enter to search or ESC to close

Having been raised in a family of publicans with lots of noise and music, we were now living in the quiet of the countryside. 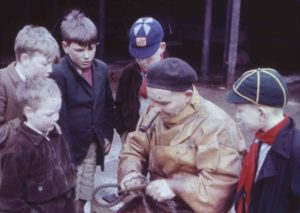 At the outbreak of war I was living in the Fountain Head Pub, North Shields, together with my father, mother, brother and sister. I was eleven years old and had just started at Ralph Gardner School, having left Queen Victoria Junior School.

We were measured and supplied with gas masks and were told we must carry them everywhere. We dutifully did this, to forget your gas mask was almost a sin; and you never forgot your identity number (GBBA 203/4).

At this time barrage balloons were being moored throughout the River Tyne district and any boy with just a spark of interest raced down to Dockwray Square to see one of the first balloons going through its paces.

Owing to the fact that there were as yet no air raid shelters completed, large crowds of school children had to be discouraged. Therefore instead of sitting in classrooms, each class was taken by a teacher on outdoor lessons.

We visited the Fish Quay to see its working day and on another occasion we walked to the edge of town and watched local farmers working and fields being ploughed. We were going to see the local magistrates court, however, because at the time the court hearings were dealing with a divorce case, the teacher thought better of it.

Before the air raid shelters were completed, the school was scheduled for evacuation and together with my brother and many others we were evacuated amid lots of tears.

We arrived at Bellingham where all the pupils were housed, except my brother and I. We were taken by van over the moors to Otterburn. Here we were to live with the Waddells at Otterburn Mill.

This was an entirely different lifestyle. Having been raised in a family of publicans with lots of noise and music, we were now living with the ‘county set’ in the quiet of the countryside. We learned to bring in the cattle, milk the cows and muck out and feed. On one occasion we herded some cows to nearby Elsdon to be serviced by a bull. Collecting eggs from free-range hens was a bit like ‘hunt the thimble’ for they laid eggs in the most unlikely places around the mill yard.

Occasionally on Saturdays, we would go off shooting with Mr Waddell and one of his friends, in the Armstrong Siddeley car (on pink petrol). This was to augment the food rationing. We were the gatherers, as they shot partridges, rabbits and snipe. So despite the rationing, we lived and ate well with plenty of fruit from the orchard and plenty of game.

One of the highlights of our stay in Otterburn was to welcome home a hero (I think his name was Archibald). He commanded a destroyer and during one naval engagement his vessel sank two German U-Boats. On arriving home on leave he was given a great welcome. All the village turned out to greet him and the young boys, which included my brother and I, pulled him with ropes up the drive of Otterburn Hall whilst he was seated in an open-topped car. This was recorded on the cinema newsreel of the day and I saw it years later on TV’s ‘All Our Yesterdays’.

I cannot quite remember the dates, but we were transferred to Wooler to stay in the same house as our younger sister, the ‘Drill Hall’ just beside Wooler water, next to Redpath’s Garage. Although we had no complaints about Otterburn, I think we were attracted to Wooler by letters from our sister telling us about going to the ‘pictures’ free. The Drill Hall was the local ‘picture house’ and the film changed three times a week.

We were in Wooler when the Essex Regiment arrived in the district, as boys we thought this was great. What with all the Bren Gun carriers, army lorries and staff cars arriving, Westland Lysanders flying overhead, and a band – at the time the big bass drum player was the biggest man I had ever see – Wooler was buzzing.

At the outset, a number of soldiers were billeted in the old derelict mill just behind the ‘Drill Hall’ – poor chaps! We watched them stuffing their palliasses with straw for bedding, they slept on the floors of the Mill, with Hessian sacks to cover the glass-less windows (perhaps it was still better than being under canvas). I think they used to march up to the church hall for meals.

As time progressed, German prisoners came to Wooler to work on the farms. I remember they sculpted eagles out of cement or plaster and painted them. They were placed on the gateposts of the area where they were held, which I think was on the road to Whitsun Bank. Although this was all very interesting, because of homesickness and the lack of enemy bombing in North Shields, we persuaded our parents to allow us to return home. During our evacuation our parents had left the pub, my father being a qualified boilermaker-plater was back in the shipyards and we now lived in Kirton Park Terrace. We returned to ‘Shields’ just in time for the bombing to start!

Preston Hospital was hit, and the streets were flattened down beside Smith’s Dock. As we had no air raid shelters at this time, during a raid we had to run the gauntlet from our house to Preston Park communal shelter. The ack-ack guns from nearby fields sounded as if they were in the same street – what a noise. Occasionally in the middle of the night we would just stay under the stairs, which was said to be the strongest part of the house. We did get our Anderson shelter in reasonable time and my father made it pretty comfortable.

I remember one night during a raid, standing with my bike at the traffic lights waiting for the lights to turn green while bombs were falling! I must have been crackers, there wasn’t a car in sight. It just shows how we obeyed the rules in those days.

They hit North Shields Goods Station that night. My brother who was now working at a gents’ outfitters and was also a fire watcher, went down to the shop to remove all the suits and goods from the shop window display because the glass had been blown out. He then cycled to the owner’s in Whitley Bay to inform him and was given a 3d bit for his efforts.

As schoolboys, we used to hope that the all-clear siren would go off after midnight which allowed us to go to school late the following morning. Before midnight and we had to stick to normal times.

At this time the WRAF occupied the old Tynemouth Golf Club-house. They were billeted there to man the barrage balloon which was situated on the golf course at Spital Dene. These balloons would occasionally break loose and spiral into the sky where eventually they would burst into flames. The barrage balloon material that did not burn fell to the ground to be snaffled by the first person on site. This spoil of war was highly prized as it was a wonderful waterproof material for covering garden sheds, our hen cree was beautifully watertight. As boys, we used to serenade the WRAF’s by singing harmony Mills Brother style.

At the Fish Quay, many fishing trawlers were converted into mine-sweepers with Paravanes and Lewis Guns for exploding the mines. They were also equipped with their own barrage balloon to guard against enemy attack.

On leaving school at 14, I went to work at John Readhead & Sons, Shipbuilders & Engineers, South Shields, first as an office boy, and then as an apprentice draughtsman and later as a fully qualified draughtsman.

As office boy, I was first in the office to open the basement strong room where overnight all the plans and documents were stored for security. The air raid wardens/fire watchers’ telephones had to be unplugged from the basement and re-instated in the drawing office. All blackouts had to be taken down so that the office was ready for the staff to start work. On leaving the office at night all this ritual had to be done in reverse, so I was often last to leave.

Readheads produced a wonderful effort during the war. We built the prefabricated ‘Empire’ type general cargo vessels. As well as conforming to classification society requirements they had to satisfy Admiralty regulations. Many were equipped with Admiralty Net Defence (A.N.D.) booms and nets to protect against torpedoes. Paravanes were fitted and degaussing was installed to guard against magnetic mines. The ships were all fitted with stiffening for guns, heavy gun aft and Oerlikon guns on the bridge wings.

We also built one vessel with a catapult forward for a plane. This was usually a Hawker Hurricane and was to protect the convoy against enemy aircraft.

What brave pilots they must have been, after being catapulted off they then had to fight off the enemy knowing that successful or not they could not land anywhere. They just had to ditch into the sea near the convoy and hope they would be picked up by one of the convoy vessels.

The graving dock side of Readheads kept us busy repairing vessels with the fore or after end ‘blown off’ or some other mine or torpedo damage, still they were all able to resume ‘normal service’.

One highlight of my time at Readheads was the visit of the King and Queen to the yard, although it was a surprise visit, by the time they arrived at the yard everyone was around to greet them

About this time I joined the Air Training Corps. We studied Morse Code, aircraft recognition, gliding and many other subjects. During our summer camp we were stationed for one week at RAF Stannington, near Morpeth, where we were taught to use a parachute – dropping from a very high trestle in the hangar suspended on two wires attached to a full parachute harness. You had to be able to turn yourself to get the ‘wind’ at your back and to land going forward. I had a flight in an Avro Anson, however, we cadets were only allowed ‘up’ when no live ammunition was being used.

I did receive my ‘call-up’ papers for the forces, but as I was in a reserved occupation I was exempt from duty.

As the war turned in our favour the shipyard built some small tankers with cut-away bows for running onto the beaches of Europe during the Invasion. These ships allowed our forces to have immediate access to oil and fuel on the ‘enemy’ side of the Channel.

One thing about the war, we all knew we were going to win it. It never occurred to us that we would lose. Nevertheless, we were all relieved when it was over and once again lights were switched on.

If there was such a thing, I’m sure I had a good (lucky) war. An uncle was lost at sea as a result of enemy action and one of our barmaids, a lovely girl, was killed together with her whole family when the house suffered a direct bomb hit. But none of my immediate family suffered, we didn’t starve, we didn’t want for much, we worked hard when the time came, but in the end it was worth the effort everyone made – we won.