Growing up in Tynemouth and Marden (from 1954)

We could make the banana slide really slippy with the greaseproof paper the bread came in then. The parky would shout at us if we pushed the swings too hard or too high. 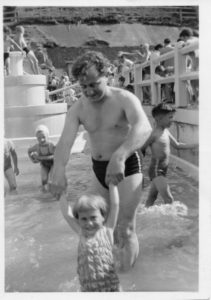 I was born in Tynemouth in 1954.  We lived in a flat overlooking the beach.  We would spend many days on the beach in the summer and in the outdoor pool.  In those days there were crowds of other people just taking in the sun and air, relaxing and playing, groups of friends and families all there for the day, swimming in the sea and picnics.

If we had some money we would use the outdoor pool, this was always very busy.  There was a small paddling pool with a huge fountain and the larger pool.  The staff would always put the temperature of the water on the gate and anything over 50 degrees was to us ‘very hot’.  We would spend hours in there, then come out and buy hot Oxo; this was lovely and warming, you often needed it.  There were often bonny baby or beauty competitions as well as swimming competitions and events.

My first school was Priory School in Tynemouth village.  I remember the hall for assembly and also the outside toilets which where cold and often froze up in the winter.  I also recall the horrible hard toilet paper that we got in those days.  Sometimes when I was in the playground, I would see my mum shopping across the road in the Co-op.

At that time in Tynemouth Village, opposite the school, we had the Post Office, Terry’s the hairdresser.  I think there was a cobbler, the Co-op store (which is now a cafe) where most people got all their shopping, a newsagent which is still there, and many others, and that was as well as Tynemouth Front Street.  I remember the dentist Mr Adams, in one of the terraced houses further down the road towards the beach.

In 1969 when I was 5, we moved to Marden Estate and I started going to Monkhouse School.  This was luxurious as it was a fairly new school and the toilets where inside, however our classroom was in a wooden building set at the back of the school, so we still had to go across the yard to get to them.  We had assembly every morning and I can remember some of the teachers were very nice; the head teacher at that time was Mr Weightman.

We had a children’s playground over the road, with all kinds of equipment, no soft landing pads though, just concrete bellow the swings.  But we did have a park keeper or parky as he was known.  He had his own little brick built office with a fire and kettle in there, and he would shout if we pushed the swings too hard or too high.  We could make the banana slide really slippy with the greaseproof paper the bread came in then.

Saturday afternoon we would go to the Plaza skating rink and go round and round in circles on our roller skates; it was very popular at the time, although now I am not sure.  The place was normally crowded.

Mam still shopped in the Co-op in Tynemouth.  She would go there first, order and pay for the shopping.  I remember they used to sell loose butter by the pound; potatoes and vegetables would be wrapped in newspaper, no plastic carrier bags.  Then she would go into North Shields to Hadaway’s for fresh fish and then home (all on the bus); the Co-op would deliver the shopping later on that morning.

About the same time each Saturday, we would get a delivery of logs and sticks from the man who came round with his horse and cart.  Coal initially came on a horse and cart, but soon progressed to a motorised wagon.  We had no central heating in the house, just a coal fire and an immersion heater for hot water.  I can remember the ice forming on the inside of the windows, brrr!

They built a new fire station at the top of our road about the time we moved to Marden, and I remember the fire engines coming down our street to an emergency with one of the firemen ringing a bell by hand.  The ice cream man did the same thing, no Greensleeves, just a hand bell he would shake out of the window.

From there we went to Marden Secondary Modern, another new school; the head teacher then was Miss Nicholson.  I didn’t really enjoy school until the last couple of years when we took commercial courses, shorthand, typing etc. this was much more interesting I thought than history.  At secondary school you were allowed out of the grounds at lunch time, and we use to go to Carrick’s for a 1p bag of broken biscuits (3p if they had chocolate on).  Chips were only a couple of pence a bag then.

Not long before leaving school we got careers information.  A lot of people, boys and girls would go off to work in Haggies rope works, Formica, Wills; all in Wallsend.  I think it was good pay but I understand not very nice places to work.

We also had several cinemas to choose from: The Carlton in Tynemouth, The Albion and the Gaumont in North Shields, and there was one in Monkseaton (which was knocked down to build a block of apartments).

We would go to the Royal Sovereign in Tynemouth on Saturday nights, drinking cider and green ginger, and then walk home so that we saved the bus fare.  Other nights out were the Royal in Whitley Bay, the Burgundy Cobbler, The Sands and the Rex — all great venues at that time.