The team has been having a new year sort out and we came across these images and articles from 1983, taken by Ernest when SS Uganda came into Smith’s Docks in North Shields for repairs after her service in the Falkland War.  Ernest told local news reporters: “I was worried she would arrive during the day while I was at work so when I found out she was coming in at 7.00am I was very pleased”.

When Uganda, formerly a cruise ship,  was in the Falklands she wore the Geneva Convention/Red Cross livery identifying it as a hospital ship.  It was staffed by a team of some forty Queen Alexandra’s Royal Naval Nursing Service (QARNNS) personnel.  If you follow the link here you’ll be able to see images of her as a hospital ship and find out about the experiences of the nurses who stood by for Falklands casualties: https://www.bmmhs.org/meeting-january-2021-white-ship-red-crosses/ 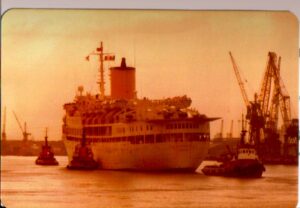 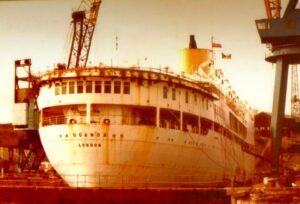 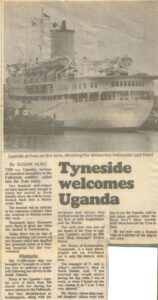